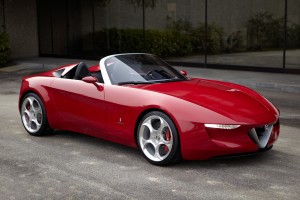 Rumours (dreams?) of a Duetto inspired Alfa Spider has been around ever since the last type 105 Spider S4 rolled out of the factory in 1994. They had died out a bit, but after we’ve had the 4C concept presentation, the Spider guesses are starting once again. I’ll try to update this post as the news drops in…

[Update 2012-05-23] – Fiat and Mazda announce that they intent to build the next Alfa Spider and Mazda MX-5 (Miata) on the same platform. Hopefully the result will be better than the last time Alfa collaborated with a Japanese manufacture.