Ever since the first videos of the Motorola Xoom

started appearing online, I knew that a Honeycomb tablet would be the perfect device for comfort computering. When the Xoom finally came to market, it turned out to be both pretty expensive and only available in the US. So I started looking at the alternatives. Here the Asus Eee Pad Transformer (TF101)

looked like a great compromise between price, design and size/weight. That release kept being delayed in Europe, but it arrived for sale in the beginning of June, and I ordered the 16GB version with keyboard dock

I’ve now been using the tablet for a week, and the experience has been very positive even though it’s apparent that Honeycomb is a work in progress. First of all, it really is great for comfort computering, sitting in the sofa, browsing the web. It’s also a pretty neat ebook reader, it comes with the Zinio magazine app, which includes a bunch of free magazines, and I regulary use it to read the PDF version of the newspaper. 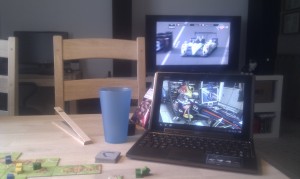 The hardware is very nice, especially considering the price point. The metal bezel feels nice to the touch, the plastic back has a nice texture and the (IPS) screen just looks fantastic. The cutouts in the metal bezel for microSD card and miniHDIM can feel a bit sharp though. The keyboard dock has metal top with island / Sony Vaio

(no, Apple wasn’t first with that design) style keys, they’re nice enough to type on, but nothing spectacular. The multitouch touchpad is responsive, though the mouse buttons can feel a bit hard to press down. The keyboard dock includes an extra battery which keeps the tablet charged, so it’s always ready for use. The keyboard dock also has two full size USB ports and a full size SD slot. While the keyboard dock protects the screen like a laptop would, I’ve ordered a case for the tablet so I can use it out and about without the keyboard attached (Acase Leather Folio Case Cover for Asus Eee Pad Transformer 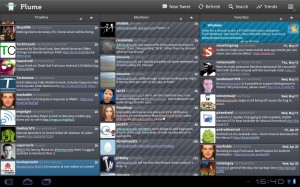 While the Android OS is fully usable with the mouse and keyboard, it’s clear that it’s with the touch screen interface it shines. Everything is very smooth and slowdowns are a very rare experience. The stock Android browser is great, it looks and works like the Chrome desktop version, with tabs and everything. Flash works well, but it’s nice to be able to choose when it should be enabled. There are still a lack of tablet (/Honeycomb) optimized apps, and the market (here) doesn’t yet include such a category to make it easier to find the once that are there. I currently use Plume as my Twitter client, it has a nice set up with a couple of windows for different kinds of messages. 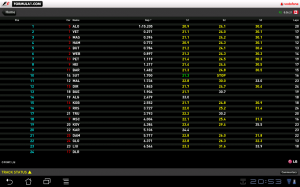 The TF101 has really shined during the 24h Le Mans qualifying, where it handles both live timing, news and Twitter feeds perfectly, and it’s very comfortable to hold and use while keeping an eye on the TV. The battery will last for at least 8 hours with tasks like this (probably double that when connected to the dock), the charging cable is very short though, so it’s wise to charge it whenever you’re not using it to avoid having to use it while it’s plugged in. The F1.com app looks even better on the larger tablet screen, than on phones, and can show all the drivers / lap / sector times on one screen.

One great build in app is the Asus branded Splashtop (free version). This works like most remote desktop apps (like VNC), where you get full control over a computer over the network. Where Splashtop excels is in the impressive handling of video, I can play any video on my desktop and Splashtop will stream it to the Transformer(!), it even works for live TV which the desktop shows in GB-PVR. When it’s running, it looks and feels like you have a wireless, 10″ TV with build in PVR functions, not to mention full access to Netflix, Hulu and so on (these doesn’t currently run natively on the Transformer, but they can run on a network attached computer and be streamed to the tablet).