It all started as a kind of a joke record label (*) back in high school around 1997 when I recorded a Legend Of Bob set @ Solrød Gymnasium and thought I should put a label name on the CDs. Later on I used the name when I put my own music online. 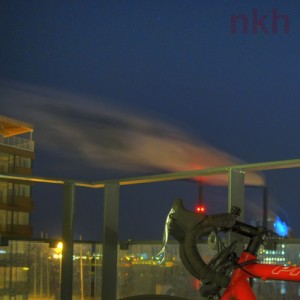 The latest (and greatest) tune I put online is Insomnia, demo from 2003. I guess that date should tell me that it’s time for me to pick up the instruments again and get them plugged into the computer. I also still like the little demo I did around the same time, which just ended up being called Demo1-short. This recording was a bit special, as even though it’s layered keyboards and guitar (two keyboards and one guitar) it wasn’t recorded on the computer or on a multi track recorder. The setup was instead a VHS machine and a MiniDisc recorder, where I first recorded one track on to the MD, then plugged it into one channel on the VHS machine while I plugged the next instrument into the other channel, there by getting a two track recording. Then when adding the next recording I played the VHS tracks mixen in mono and recorded them onto one channel on the MD, while overdubbing on the other channel, that gave a new two track recording where one of the tracks was the two previous tracks mixed together.

Aside from various recordings of Legend Of Bob (later, Lobstarz), I also had Dj ImpreSSion on the label. This quite strange mix resultet in the tribute album Weltklasse 2000, which was released in seriously limited quantities (around 5 or 6 CDs were made). This included such hits as Helt vildt glad (feat. Jon, Kasper and the backing group known only as “3Z”), remix-dreamcastle-fastsantamix (originally a Dj ImpreSSion song, remixed by me, feat. Catsteen) and the Dj ImpreSSion song here:

* – it still is a joke record label

One Response to soNick records